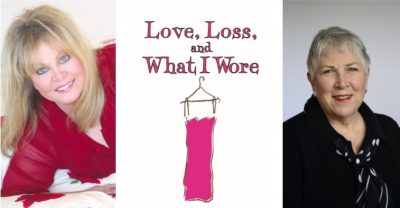 Emmy Award winner Sally Struthers and Broadway, Film & TV favorite Joyce Reehling headline Love, Loss, and What I Wore at Judson Theatre Company (Morgan Sills, Executive Producer and Daniel Haley, Artistic Director). Struthers is perhaps best known for playing Gloria Stivic on the iconic television series All in the Family and Babette Dell on Gilmore Girls. Reehling is a beloved veteran of stage (Fifth of July) and tv (Law & Order). Love, Loss, and What I Wore opens Thursday, October 18 at 7:00 pm and runs through Sunday, October 21 at the Hannah Center Theatre at The O’Neal School  (3300 Airport Road, Southern Pines, NC 28387).  Additional casting will be announced at a later date.

Proving that a great show is always in fashion, Love, Loss, and What I Wore has become an international hit.  With its compulsively entertaining subject matter, this intimate collection of stories by Nora and Delia Ephron celebrated an accomplished two-and-a-half year run at New York’s Westside Theatre.  Love, Loss, and What I Wore is based on the best-seller by Ilene Beckerman as well as the recollections of Nora & Delia Ephron’s friends.  The show uses clothing and accessories and the memories they trigger to tell funny and often poignant stories that all women can relate to, creating one of the most universal and enduring theatergoing experiences in recent memory. Critcs raved: “Funny…compelling…brought down the house!” –The New York Times; “Funny, powerful, sweet and saucy! Goes directly to the heart, soul and vanity of every woman, young and old.” – Variety

The performance schedule for Love, Loss, and What I Wore is as follows:

To purchase tickets online now to Love, Loss, and What I Wore or request additional information, please visit https://judsontheatre.com/. Tickets will be available to purchase in person at local outlets beginning Tuesday, September 4. Discounted Group Rates (10+) are available online, or email: JudsonTheatre@gmail.com; Discount Student and Military Rush tickets available at the door (limit 2 per ID).

SALLY STRUTHERS is a two-time Emmy Award winner for her performance in the groundbreaking TV series All in the Family. She starred in the Fox television series 9 to 5 and her own CBS series Gloria. She also recurred on the CBS comedy Still Standing and the CW network’s highly acclaimed Gilmore Girls. She joined the Gilmore cast for Netflix’s four movie limited revival, which premiered in 2016. She recently guest starred in the acclaimed IFC comedy series Maron. Sally’s first two Broadway forays were in Wally’s Café with Rita Moreno and Jimmy Coco and Neil Simon’s female version of The Odd Couple with Brenda Vaccaro. For three years she starred as “Miss Mamie Lynch” on Broadway and on tour in the Tommy Tune production of Grease. In the 20th Anniversary National Tour of Annie, Sally played the coveted role of “Miss Hannigan.”

JOYCE REEHLING spent over 30 years in New York working in theatre, television, and film. She appeared in the original casts of Fifth of July and Prelude to a Kiss on Broadway, and off-Broadway in such notable plays as The Miss Firecracker Contest, Reckless, The Hot L Baltimore, Extremities, and The Runner Stumbles. As a member of the prestigious Circle Repertory Company, she originated many roles for playwrights Lanford Wilson, Milan Stitt, David Mamet and others. Joyce worked with Bill Hurt, Christopher Reeve, Richard Thomas, Debra Monk, Swoosie Kurtz, Jeff Daniels, and Cynthia Nixon to name a few. Joyce did many commercials for TV and Radio; she was the first Dr. Mom and was the voice of IKEA on radio. Film credits include Longtime Companion, Lorenzo’s Oil and Roommates. TV shows such as Law & Order, Ed, Kate and Allie, NYPD Blue, The Equalizer, Cosby and numerous daytime dramas were a part of her career. She is a proud member of Actors Equity and SAG-AFTRA. She and her husband now reside in Pinehurst and she writes for The Pilot.

NORA EPHRON & DELIA EPHRON (Playwrights) Nora Ephron (1941-2012) was a journalist, novelist, playwright, screenwriter, and director. Her credits include the films Heartburn, When Harry Met Sally, Sleepless in Seattle, You’ve Got Mail, and Julie & Julia. Her Broadway credits include Lucky Guy and Imaginary Friends. Her book I Feel Bad About My Neck: And Other Thoughts on Being a Woman was a number-one best-seller. Delia Ephron is a best-selling author, screenwriter, and playwright. Her movies include The Sisterhood of the Traveling Pants, You’ve Got Mail, Hanging Up (based on her novel), and Michael. She has written novels for adults and teenagers, books of humor, including How to Eat Like a Child, as well as many essays. Her journalism has appeared in The New York Times, O the Oprah Magazine, Vogue, MORE, and The Huffington Post.

“After worldwide success, this hilarious and heartwarming play is making its Sandhills debut at JTC, and it’s just what the world needs now…it’s sure to be an audience favorite and we invite everyone to come laugh with us.” states Executive Producer Morgan Sills (Broadway’s Of Mice and Men, Party Face starring Academy Award winner Hayley Mills) “We’ve been saving this play to produce during the Owens Auditorium renovation, in our new temporary home at the Hannah Center Theatre. Sally Struthers, Joyce Reehling, and The Ephrons are an unbeatable entertainment combination.” says JTC’s Artistic Director, Daniel Haley.