Download your digital program for MIRACLE ON 34th STREET 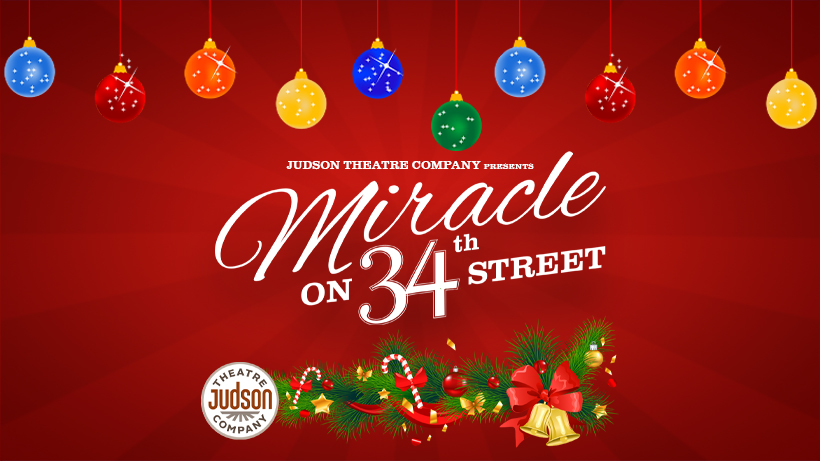 More info about the show:

Judson Theatre Company and Muirfield Broadcasting announce a special radio performance of the holiday classic Miracle on 34th Street. The hour-long broadcast will air Thursday, December 24 at 11:00 am, with an encore rebroadcast Friday, December 25 at 6:00 pm on both 550 AM and Star 102.5 FM.  In between, Muirfield will be airing 30 hours of non-stop holiday music.

“Muirfield Broadcasting has been a Season Sponsor for five years now, and we’re thrilled to expand our partnership in this new direction. This free performance is a holiday gift from JTC and Muirfield Broadcasting to Sandhills area audiences.” said Judson Theatre Company Executive Producer Morgan Sills. Listeners can view a theatre program for the event at JudsonTheatre.com starting December 24th.

Miracle on 34th Street began as an original story by Valentine Davies. It takes place between Thanksgiving and Christmas Day in New York City where a department store Santa Claus, going by the name of Kris Kringle, claims that he is the real Santa, leading to a court case to determine his authenticity. Novelized simultaneously with the release of the first movie version, this perennial holiday favorite has been adapted and updated multiple times for film, television, theatre, and radio.

“We used Zoom to rehearse. The actors recorded their roles remotely from New York, Los Angeles, North Carolina, and all over the country. Our sound engineer Damien Figueras supervised and coordinated the recording to blend it into a seamless whole, complete with music and sound effects,” said Artistic Director of JTC Daniel Haley, who also directed the radio play. “As the pandemic continues we’re doing our best to keep our loyal audience engaged and reach new audience members through streaming programming, radio plays, and additional social media features.”

Judson Theatre Company is a 501c3 non-profit arts organization, and the professional theatre company in residence at Bradshaw Performing Arts Center (BPAC). Miracle on 34th Street is supported by the Arts Council of Moore County and the North Carolina Arts Council, a division of the Department of Natural and Cultural Resources. Audience members who wish to include JTC in their end-of-year giving may make a tax-deductible donation by clicking on the Donate button on this site, or by calling (910) 585-6989.