Announcing Our Shows for Season 8! 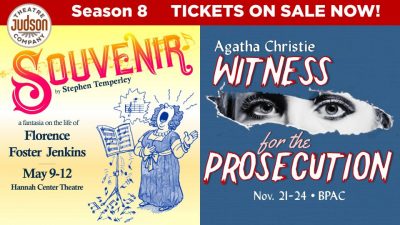 the Agatha Christie Classic Witness for the Prosecution

PINEHURST, N.C., Monday, February 11, 2019 –Judson Theatre Company (Daniel Haley, Artistic Director and Morgan Sills, Executive Producer) has announced their Eighth Season: Souvenir: A Fantasia on the Life of Florence Foster Jenkins by Stephen Temperley and Agatha Christie’s Witness for the Prosecution.  Souvenir opens Thursday, May 9, 2019 and runs through Sunday, May 12.  Witness for the Prosecution opens Thursday, November 21 and runs through Sunday, November 24.

Stephen Temperley’s Souvenir: A Fantasia on the Life of Florence Foster Jenkins is the true story of one of opera’s most unforgettable stars. Florence Foster Jenkins, an eccentric and wealthy New York socialite, believes she is an enchanting coloratura soprano and she wants to share her talent with the world. After teaming up with a new pianist, Cosmé McMoon, she begins to hold recitals at the Ritz Carlton. Festooned in fabulous costumes, she becomes a sensation. Unfortunately, the truth is Mrs. Jenkins can’t really sing…but there’s more than one way to get to Carnegie Hall!  Souvenir is the tuneful comedy that beguiles the hopeful artist who lives in us all.

After a successful off-Broadway run in 2004, Souvenir opened on Broadway in 2005 starring Judy Kaye, and has been constantly produced in theatres worldwide ever since. Ms. Jenkins’ life story was adapted for the screen in the film Florence Foster Jenkins with Meryl Street and Hugh Grant.

The performance schedule for Souvenir is as follows:

Souvenir will be performed at the Hannah Center Theatre at The O’Neal School (3300 Airport Road, Southern Pines, NC).

Agatha Christie’s Witness for the Prosecution is the story of Leonard Vole, a young man facing murder charges in the death of a rich older woman, Emily French, whom he has befriended. But he couldn’t have killed her — not if his alibi, that he was home with his wife at the time of the murder, is to be believed. What really happened? Who is telling the truth? This criminally delicious drama of death and deceit keeps the audience guessing till the very last scene.

Agatha Christie adapted Witness for the Prosecution for the stage from one of her short stories. The play was a personal favorite of Agatha Christie’s and is considered her theatrical masterpiece. Running for a year and a half on Broadway in the 1950s, it has been an international success for decades, and recently enjoyed a hit revival in London.  Witness for the Prosecution is perhaps best known from Billy Wilder’s 1957 film adaptation starring Marlene Dietrich, Tyrone Power, and Charles Laughton. It has been adapted for television multiple times, including the recent 2016 BBC miniseries.

The performance schedule for Witness for the Prosecution is as follows:

Witness for the Prosecution will be performed at Bradshaw Performing Arts Center (formerly Owens Auditorium) on the campus of Sandhills Community College, located at 3395 Airport Road in Pinehurst.

To purchase tickets online now to Souvenir or Witness for the Proseuction or request additional information, please visit https://judsontheatre.com/. Tickets for Souvenir will be available to purchase in person at local outlets beginning Monday, April 1. Discounted Group Rates (10+) are available online, or email: JudsonTheatre@gmail.com; Discount Student and Military Rush tickets available at the door (limit 2 per ID).

Casting for both shows will be announced at a later date.

“After last year’s successful seventh season, we’re thrilled to bring these two terrific plays to the Sandhills.”  states Morgan Sills (Executive Producer).  “Following our production of Agatha Christie’s And Then There Were None broke our box office and attendance record in 2017, our audience told us we should do more Agatha Christie—and Witness for the Prosecution still packs a punch. Souvenir is sure to delight the Sandhills audience as well.” says JTC’s Artistic Director, Daniel Haley.